Joshua Mathiasmeier, RD, is a “yes man.” If someone asks him to help out, particularly if it’s a person or organization that has helped him out in the past, he’s going to agree. This practice has left him a bit overwhelmed at times, but Mathiasmeier can’t imagine life any other way. A relative newbie in the K-12 school nutrition segment, he graduated with three bachelor’s degrees from Kansas State University in 2012 and began his K-12 journey with the Kansas State Department of Education’s Child Nutrition and Wellness team for two years, before turning to operations with Kansas City (Kan.) Public Schools. In a few short years, Mathiasmeier has already hurtled to the top leadership position at SNA of Kansas (SNA-KS). Although he hasn’t jumped into a national-level role (yet), Mathiasmeier is clearly on the grow in this profession.

A lot of people get “volun-told” into various positions and responsibilities, but one of my mentors is a “yes man,” and that’s kind of how I am, too. I truly enjoy helping; that’s the type of people we dietitians are. Being helpful whenever I can also helps me to grow, learn and be the best person I can be. 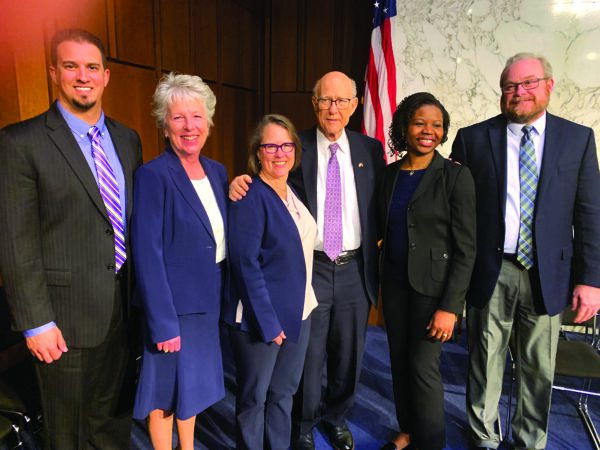 I joined SNA before starting with Kansas City Public Schools, but it was as a new director, when I was connecting with colleagues, that someone thought I’d be a good fit for a SNA-KS leadership position. I reached out and ended up running for the District Director/Supervisor position on the SNA-KS board of directors. A year or two later, I was asked if I would run for vice president, and that put me on the track to be president. I said “yes,” because my job is the absolute most important thing to me—other than my family—and through these leadership opportunities, I can better both my personal self and become a better leader and manager for my district team.

I have enjoyed getting to know a lot of the people at SNA in a fairly short time. Last April, I had the unique opportunity to testify about school nutrition issues on Capitol Hill in front of the Senate Agriculture Committee, which is chaired by Sen. Pat Roberts of Kansas. I went to Washington, D.C. and prepared for the hearing by spending time with the SNA Headquarters staff. The support that they provide to the states and to directors is the biggest strength of the organization!

When hiring in our department, we ask candidates, “What’s the difference between a leader and a manager?” To me, leadership is about other people. The primary role of a leader is to be there for people, bringing out the best in them and setting an example. It’s the complete opposite of being a “manager” of people—especially a micromanager.

I’m working on training managers to become leaders. Since I can’t personally engage with 258 employees every single day, we focus on training the trainer. This helps to ensure that the people who are working with our teams every single day are well-equipped, especially in the areas of recruitment and retention.

If you’re thinking about volunteering in a leadership position, just do it. In any type of volunteer work, there are always going to be sacrifices, frustrations and struggles. However, the relationships and the fun that come from the experiences are totally worth the challenges.

“Being helpful whenever I can also helps me to grow, learn and be the best person I can be.”

My relationship with my mentor, Dr. Kevin Sauer, a professor at Kansas State University, has grown from student-professor to that of colleagues. He’s a “yes man,” as well, and has the craziest schedule I’ve ever seen! I asked him how he does it and he said, “I have a forgiving wife and great people around me.” I’ve taken that mentality to heart, and anytime I’m around him, I try to listen and soak in what he says as much as possible. 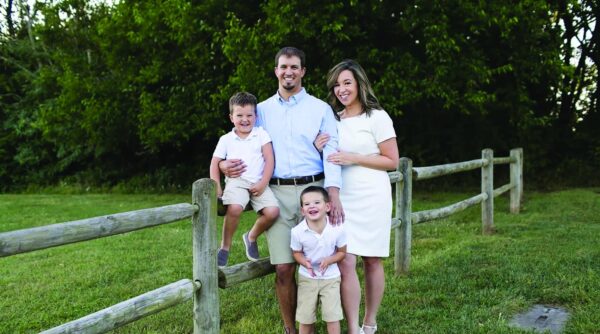 I don’t think I’d be in the position I am if it weren’t for Kevin. He’s challenged me and set fantastic examples of leadership, friendship and mentorship. And as he has modeled those skills for me, they are ones that I try to portray to all those who I support. If I’m having a really tough time with something, I’ll shoot Kevin a note and know that he’ll drop everything to help me. I try to be that type of person, too.

Additionally, my dad is one of the hardest-working people I’ve met. Everything he’s ever done has been to better his family first, and then himself and his career second. That’s the type of person I want to be. As a parent, I’m trying to do everything in my power to raise the two best-possible human beings that I can, hopefully ones who will make the world a better place. That carries into my mentorship, too—I want to try to make others be their best selves, which may mean that they leave my program and move onto bigger and better things. I’m 100% in support of that.

You need a vision. Right now, I’m working on my 2020 vision to see what the next decade will bring to our operation and how we will accomplish it. I have goals around meal participation and employee retention and recruitment. Getting fully staffed would be the best thing in the entire world—it’s something I haven’t been able to accomplish in my time here. The labor pool is just so tough right now. In the hospitality profession, you’re going to have a certain level of turnover. If I can get at or below the norms, though, I’ll be very happy.

As I continue my career, I’m always going to be looking for more opportunities to get involved. My goals will always circle around doing the best job that I can while creating and mentoring the best people possible.