Two elementary schools (Grades Pre-K through Grade 5) in the same district, each with a student population >460, were selected. At two time points spanning two years, both schools offered whole apples with lunch on self-serve school salad bars for three consecutive days. At two other time points, similar lunch menu items were offered, but sliced apples in a pan replaced whole apples on the salad bar for three days. For each of the 12 lunch sessions, the weight of apple discarded was subtracted from the weight of apple taken from the salad bar to calculate overall weight of apple consumed. Analysis was conducted using t-tests with significance set at a p value of ≤ 0.05.

The majority of children and adolescents in the United States do not consume the recommended amounts of fruits and vegetables (Guenther, Dodd, Reedy, & Krebs-Smith, 2006; Kim, et al., 2014; Nebeling, Yaroch, Seymour, & Kimmons, 2007). Research-based nutrition recommendations and National School Lunch Program meal requirements call on schools to encourage students to eat more fruit and vegetables (U.S. Department of Agriculture [USDA], 2012; U.S. Department of Health and Human Services & USDA, 2015). Although meal requirements require fruit to be taken as part of a reimbursable meal, the fruit may go uneaten for a variety of reasons and end up in the waste stream. Younger students, students with braces, and students with missing teeth may find whole fruit to be too large and cumbersome to eat comfortably (Wansink, Just, Hanks, & Smith, 2013). Additional research has suggested this problem is not limited to elementary students as some middle school students, especially girls, reported feeling messy and unattractive while eating whole fruits in front of others (Wansink et al., 2013).

Previous research has focused on portion-controlled servings of sliced apples. In one study, elementary schools were provided with a commercial apple slicer that a cafeteria worker would use to slice an apple immediately before giving it to a student. In schools with the slicers, sales of whole fruit increased by 61 percent on average (Wansink et al., 2013). Similar results observed in middle schools suggest that students’ preferences for sliced fruit persist. Three out of six middle schools in a district were provided with a commercial apple slicer, and as a result, average daily apple sales increased by 71 percent at those schools (Wansink et al., 2013). The percentage of students who ate more than half of their apple increased by 73 percent in schools provided with the fruit slicers.

Providing sliced apples presents challenges, whether pre-packed (cost) or sliced onsite (timing, efficiencies). On-demand slicing on the serving line may not be feasible for schools, especially in large districts. Further, use of centralized food production systems by districts might limit onsite production and cleaning equipment at satellite service units. To address this, some districts have installed high volume fruit slicing equipment allowing them to offer self-serve bulk sliced apples to their students. This assessment sought to quantify differences in the amounts of
apple consumed and amounts of apple wasted when elementary students were offered whole apples vs. self-serve sliced apples presented in bulk form on cafeteria salad bars.

SAMPLE
This assessment was conducted in an urban school district (“district”) comprised of 52,144 students (Pre-K through Grade 12) in 109 buildings. The district participates in the USDA National School Lunch Program (NSLP) and operates under the Community Eligibility Provision, serving meals 175 days each school year. Two elementary schools (Pre-K through Grade 5), each with a student population >460, were selected. Both schools were satellite service units with food transported from a central production kitchen. Overall, the district’s participation rate in the NSLP is 77 percent. Public health professionals from the local city health department trained data collectors. District food service staff members facilitated the data collection process while college students helped with data collection. Sliced apples in five-pound bags were purchased from the district’s produce distributor initially (S1) and later provided through the district’s production kitchen (S2), which had acquired a machine for slicing and packaging apple slices.

DATA COLLECTION
All apples, both whole and sliced, were placed in foil serving pans used on the salad bars. Prior to the lunch period, apples were weighed in the pans on digital scales before being placed on cafeteria salad bars. Two weights were recorded, with an average calculated to ensure accuracy. The weight of the foil pan was recorded and subtracted from the average. Students who selected apples were directed to discard all apple waste into separate trays adjacent to the trash bins. Project staff and volunteers monitored trash bins, salad bars, and cafeteria tables, and retrieved dropped or misplaced apple waste to ensure all apple waste was collected and weighed. The weight of the unserved apple was recorded when removed from the salad bar at the end of service. For each lunch session, the weight of apple discarded was subtracted from the weight of apple taken from the salad bar to calculate overall weight of apple consumed. The difference in weight was assumed to be the weight of apple consumed. Apple cores remaining from the sliced apples were either disposed of by the processor or diverted to a compost facility, and therefore did not enter the waste stream at the school level or at the district’s food production facility.

DATA ANALYSIS
The total weight of apple selected, consumed, and discarded at W1+W2 vs. S1+S2 was compared. Using Excel, two-sample t-tests assuming equal variances were conducted with significance set at a p value of ≤ 0.05. 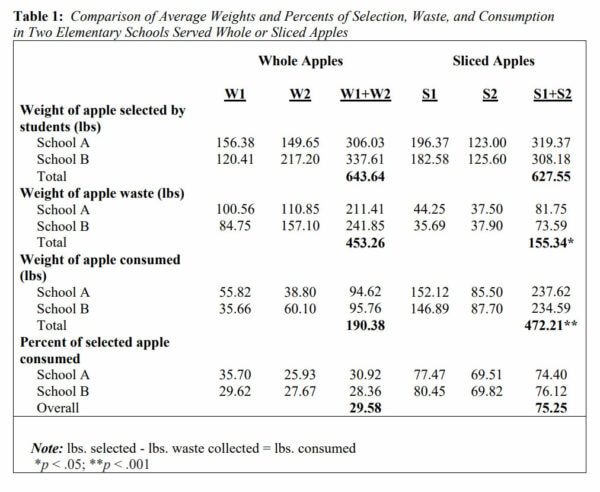 FOOD PRODUCTION COST CONSIDERATIONS
The large (over 50,000 students) urban district’s 39 middle and high schools have onsite food production capability, but the 70 elementary schools lack food preparation and cleaning equipment, limiting the capacity to serve fresh produce. The district operates a 40,000 square foot, centralized food service production center (FSPC) to serve the elementary schools. Like other districts, there is reliance on prepared food products purchased through large-scale foodservice distributors. When purchased through the district’s produce distributor for the pilot, the cost per serving for a five-pound tray of pre-sliced apples was more than four times the cost of a whole apple. Based on the volume of apples served coupled with the cost of pre-sliced fruit, this district found that the purchase and installation of produce slicing equipment at the FSPC proved to be an effective and efficient option for offering the preferred form of sliced apples on elementary school salad bars.

CONSUMPTION INFLUENCES
As suggested by work of McCool et al. (2005), students found the sliced fruit novel and more appealing during the initial assessment. Sliced apples were never a menu option in this district before due to cost considerations and lack of processing equipment. Data collection volunteers noted that many whole apples were discarded without any bites taken out of them. The whole apples were likely taken as a part of NSLP reimbursable meal requirements. In this district, it was found that offering bulk sliced apples instead of whole apples increased the likelihood that students who selected apples actually consumed at least some apple.

Data collectors also observed that when students were offered bulk sliced apples, some served themselves amounts greater than what they could consume, with many apple slices ending up on the floor under the salad bar and lunch tables. Portion control methods may be useful to reduce waste caused through service of sliced apples offered in bulk from a pan. Although general supervision of students in the cafeteria was provided by food service staff and teachers, monitors did not intervene in students’ portion selection. Careful selection of serving tools available could also minimize excess serving sizes and spillage. Further, adult helpers at salad bars can encourage selection of fruits and vegetables while monitoring serving size and protecting food from unintentional or intentional contamination.

WASTE MANAGEMENT OPPORTUNITIES
Offering sliced apples in bulk presented some advantages to this district compared to serving apple slices in pre-packaged individual portions, including decreased cost and less packaging waste. Providing pre-packaged individual servings of apple slices could be cost prohibitive for districts, especially for districts of this size. Serving bulk apple slices also reduces packaging waste because each five-pound bag of apple slices delivered from the FSPC to schools avoided packaging waste from approximately 40, single-serving plastic bags. However, there is potential that when offered bulk sliced apples, students may be more likely to over-serve themselves, thus leading to waste. Control measures as noted above can mitigate some waste.
There was less food waste discarded in the cafeteria when apple slices were offered, in part because the core was already discarded with only edible portion of the apple presented to students. For districts doing their own slicing, whether onsite or in a centralized production kitchen, the management of waste and cost of removal are considerations. In the case of this district, apple cores are picked up weekly from the FSPC by a local, organic compost service provider. Waste at service sites is not separated; thus, there are missed opportunities to implement sustainable practices. In the first three months of operating the apple slicing equipment at the FSPC, the district diverted more than 12,000 pounds of apple cores for composting. Although the district still pays a fee for this service, the apple cores are being composted into a resource, and providing an economic benefit to a local small business.

LIMITATIONS
For this assessment, data was collected at the school level with only two buildings of the district included. Assumptions cannot be made about individual students or factors influencing their consumption or waste behaviors. The number of students taking apples and apple slices, and differences between grade levels, were not tracked. Fruit selection and consumption may have been affected by the unlimited choice of fruit and type of fruits offered at each lunch period (bananas, oranges, frozen strawberries, etc.).

This district sought to reduce whole apple waste and increase student apple consumption by serving bulk self-serve sliced apples. In two elementary schools it was found that offering bulk self-serve sliced apples instead of whole apples on a salad bar resulted in greater apple consumption by students and decreased apple waste in the cafeterias. Slicing apples in the district’s centralized production kitchen also provided an opportunity to divert apple cores for composting. These preliminary findings suggest that offering bulk sliced fruit on an elementary school salad bar may be a sustainable change that promotes healthy eating and increases food waste management options, especially if amounts of student-selected portions are managed through monitors and appropriate service tools. These findings have the potential to apply to other elementary school salad bars. Future research is needed to enhance generalizability of this assessment comparing consumption of apples when offered bulk self-serve sliced apples vs. whole fruit. Research could also investigate returns on investment of mechanical equipment on operational effectiveness to assess relative costs and benefits associated with acquiring produce slicing equipment, staff time required to operate the slicing equipment, and costs of compost hauling services compared to benefits of increased apple consumption by students and meal satisfaction.

This material is based upon work that is supported by the Food and Nutrition Service, U.S. Department of Agriculture.