Impact of a Farm Stand on Fruit and Vegetable Preferences, Self- Efficacy, and Availability at Home Among Students From a Low-Income School

Bi-monthly farm stands utilizing Harvest of the Month (HOTM) produce with cooking demonstrations and recipe tastings were made available to students, teachers, and the community at a low-income school in the western United States.  A hedonic tasting chart was displayed at all farm stands, and participants were encouraged to rate the tastings.  Pre-post surveys were administered to 4th to 8th grade students following the farm stands to assess changes in fruit and vegetable preferences, self-efficacy, and availability at home. Data were summarized using descriptive statistics and analyzed using an independent t test.  Students frequented the farm stand more than families and the community and stated they would use the farm stand more if it were readily available.  The farm stand did not have a statistically significant effect on fruit and vegetable preferences, self-efficacy, or availability at home among students.  Future farm stand projects may benefit by offering a wider variety of produce on a weekly basis, providing students hands-on interactions in selecting and preparing produce, and making the farm stand more accessible to families and the community.

Lack of access to healthy affordable foods is an increasing problem in the United States, particularly among low-income communities which are frequently located in food deserts. The United States Department of Agriculture (USDA) defines food deserts as communities with limited access to healthy, affordable foods due to the distance to a store or by the number of stores in the area.  These communities may have no access to food or be limited to mini marts and fast food restaurants instead of grocery stores or supermarkets (USDA, Economic Research Service, 2016).

One program offered to low-income schools in California is the Harvest of the Month (HOTM) Program. HOTM is a series of 12 monthly lessons aimed to increase exposure to and consumption of various fruits and vegetables.  Each month a California-grown fruit or vegetable

is featured, and each student gets to taste the featured produce while learning about its benefits and how it grows (USDA, Food and Nutrition Service, 2016; Hutchinson, et al., 2015).

Another method for increasing exposure to local produce is through the use of a farm stand.  In one study, a farm stand offered once a week for 12 weeks increased access in two low-income communities. Pre-post surveys were completed one week before the farm stands were implemented and two months after they were dismantled to measure fruit and vegetable consumption. Exposure to the farm stands significantly increased consumption of fruit, fruit juice, tomatoes, green salad, and other vegetables (Evans et al., 2012). These results demonstrated that having a farm stand present may increase fruit and vegetable consumption.

Food preferences are developed at a very young age and children need to be exposed to a new food between six and 15 times before an increase in acceptability is observed (Ventura & Worobey, 2013).  Preferences can be limited to the types of produce tried and the frequency with which they are offered.  Researchers conducted a school-based cafeteria intervention where students tasted vegetables over a 10-week period. Students that initially reported disliking the vegetable reported an improved liking of the vegetable after they had tried it eight times. Increasing exposure and allowing children to have multiple tastes of a vegetable may increase the acceptance of the item (Lakkakula, Geaghan, Zanovec, Pierce, & Tuuri, 2010).

Self-efficacy, which is the extent or strength of one’s belief that he/she can bring about a particular outcome or change, is a core construct in Albert Bandura’s Social Cognitive Theory (1989).  A person’s self-efficacy strongly determines how that person approaches a task or goal (Yancey, 2014). To determine the influence of self-efficacy on fruit and vegetable consumption in fourth and fifth graders, a randomized controlled trial was conducted in Louisiana. Students participated in a 12-week Smart Bodies program that was administered by trained teachers. A questionnaire was administered to fourth and fifth grade students using a standardized protocol at baseline and again immediately following the 12-week intervention. Compared to the control group, children in the intervention reported a greater increase from pre- to post-test in nutrition knowledge and self-efficacy to consume fruit, drink juice, eat fruit instead of a favorite dessert/cookies/candy, and consume the recommended number of fruits and vegetables each day (Tuuri, et al., 2009).

In the current study, bi-monthly farm stands using HOTM produce were made available to students, teachers, and the community at a low-income school in the western United States.  Student pre-post surveys were administered following the farm stands to assess changes in fruit and vegetable preferences, self-efficacy, and availability at home.

The impact of four bi-monthly farm stands on students’ fresh fruit and vegetable preference, self-efficacy, and availability at home was examined among 4th through 8th grade students enrolled in a low-income school in the western United States.  The school was located in a food desert and did not have a farmers market in the area.  HOTM produce from local farmers was purchased and vended at cost to the community. Parents, teachers, students, and community members were all welcome to purchase the produce from 2:30-5:30 pm at the school. Cooking demonstrations and tastings were included at each farm stand featuring the HOTM produce.  Recipes were selected that had five or fewer ingredients in order to be easily recreated. With each tasting, the individual received a sticker to rate the tasting on a hedonic tasting chart with three sections: “loved it”, “liked it”, or “not my favorite”.  A tally sheet was kept to record the type of customers who purchased the produce and how much of each item was purchased. Recipe cards were also provided with the recipe for the tasting of the day. 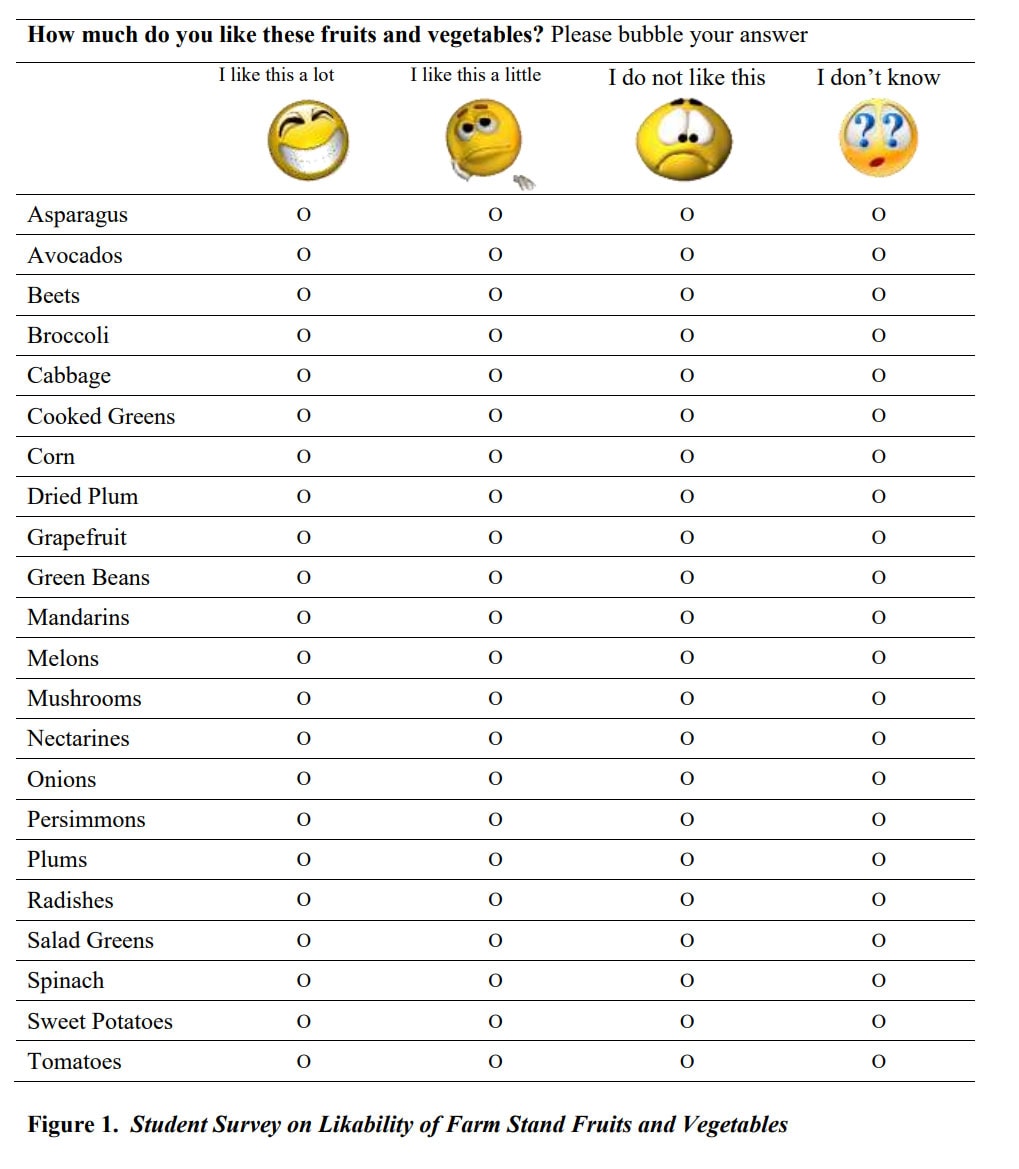 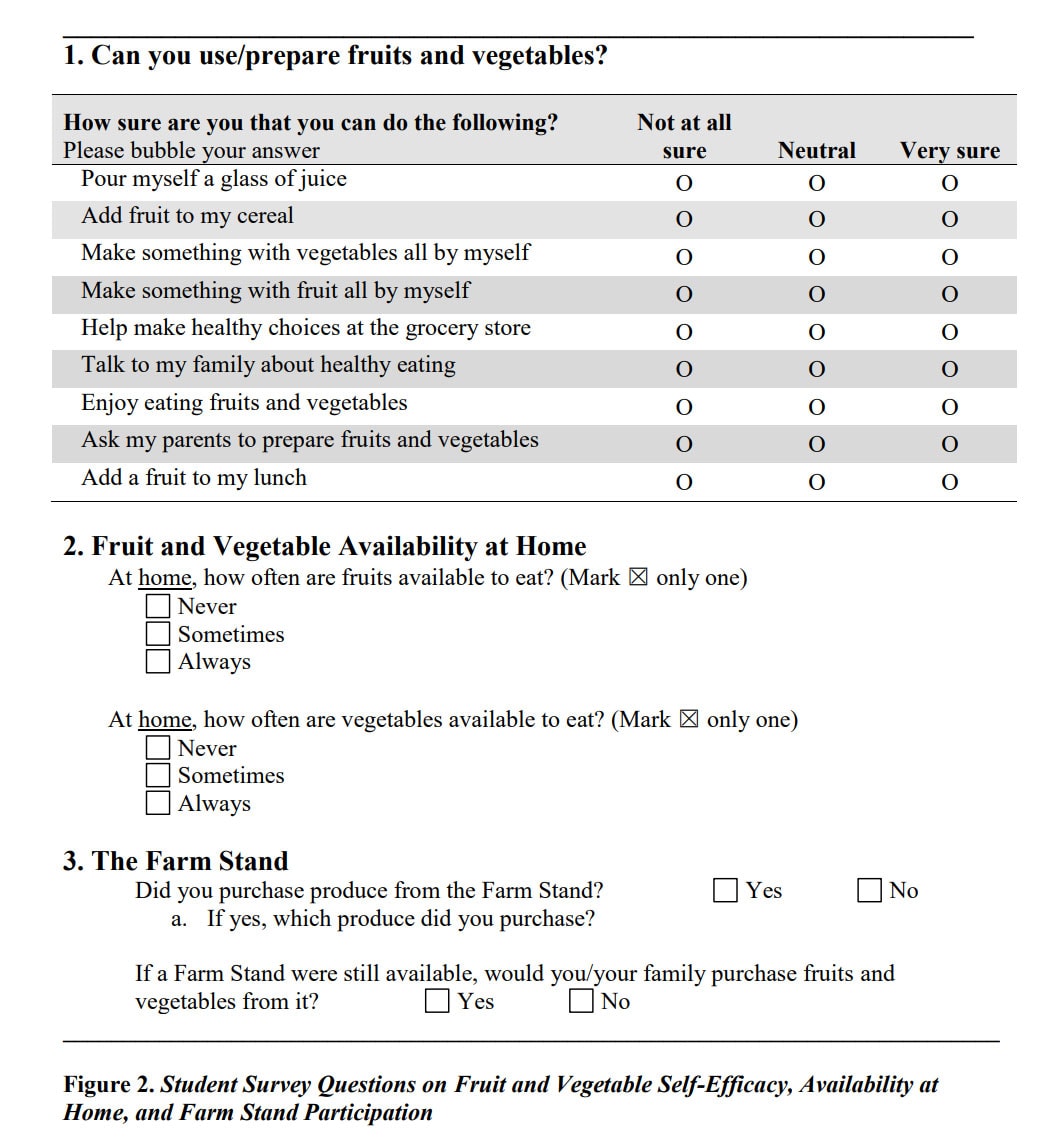 Data from the farm stand were entered into an Excel spreadsheet for analysis.  Survey data were summarized using means and standard deviations and analyzed with an independent t-test.  Significance was set at p < .05.  The project received approval from the Institutional Review Board at California State University, Chico. 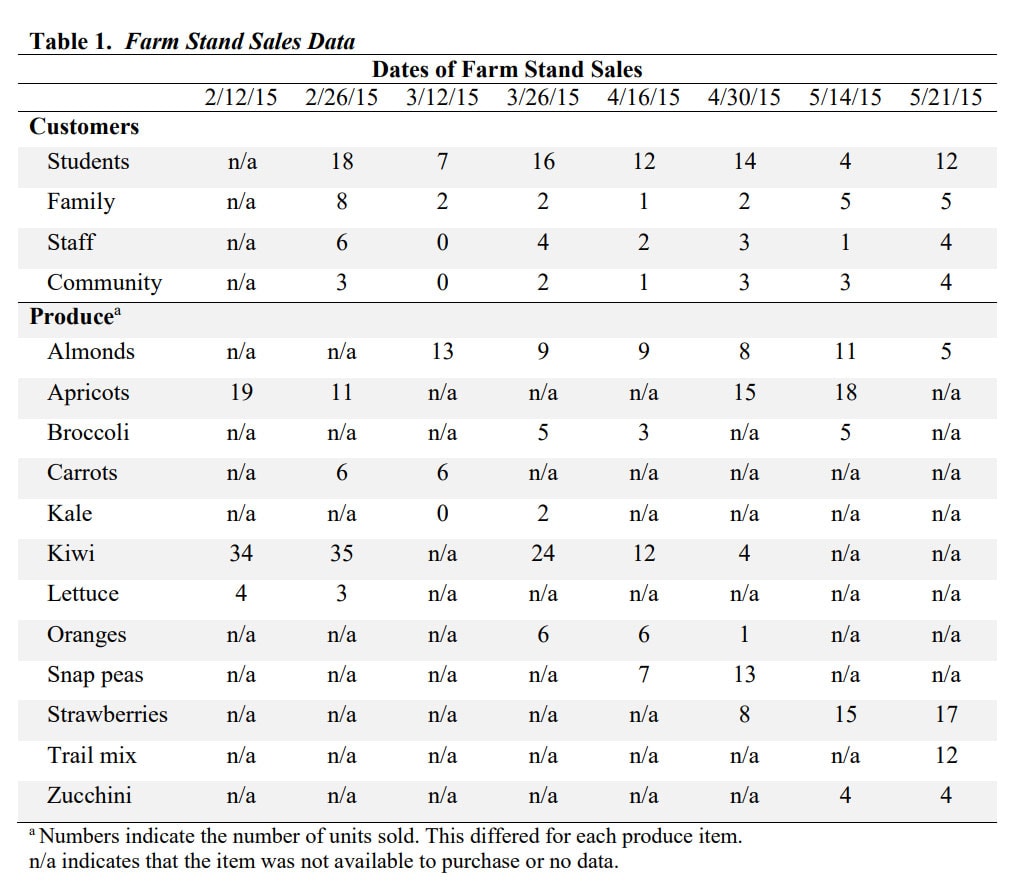 Table 1 indicates that the majority of customers at the farm stands were students. Students were the most eager participants to stop by the farm stand and try the HOTM produce along with the recipes prepared using the produce.  The most popular produce purchased was fruit including kiwi, apricots, and strawberries, respectively.  Vegetables were not as popular; however, certain items were purchased more frequently including snap peas, carrots, and broccoli, respectively.  The least popular vegetables purchased were kale, lettuce, and zucchini, respectively.  In addition to fruits and vegetables, almonds were available at the farm stand and were also a popular item.

Assessment of participation in the farm stand

Research has indicated that preferences for sweet and umami tastes are inherent in young children (Ventura & Worobey, 2013). This was consistent with the farm stand data, as students’ preference scores were higher for fruits compared to vegetables.

Impact of Farm Stand on Fruit and Vegetable Preferences, Self-Efficacy, and Availability at Home

The farm stand appeared to have a slight impact on vegetable and fruit preferences among students (Table 2).  Although there were no statistically significant differences from pre to post, the percent change in vegetable preferences increased 2.3% while the percent change in fruit preferences increased 0.6%.  Children were exposed to the farm stand only eight times during the study, and the produce available was not consistently repeated with each farm stand.  Research indicates that exposing a child to a specific food between 6 to 15 times can increase the preference for that item (Ventura & Worobey, 2013; Lakkakula et al., 2010). 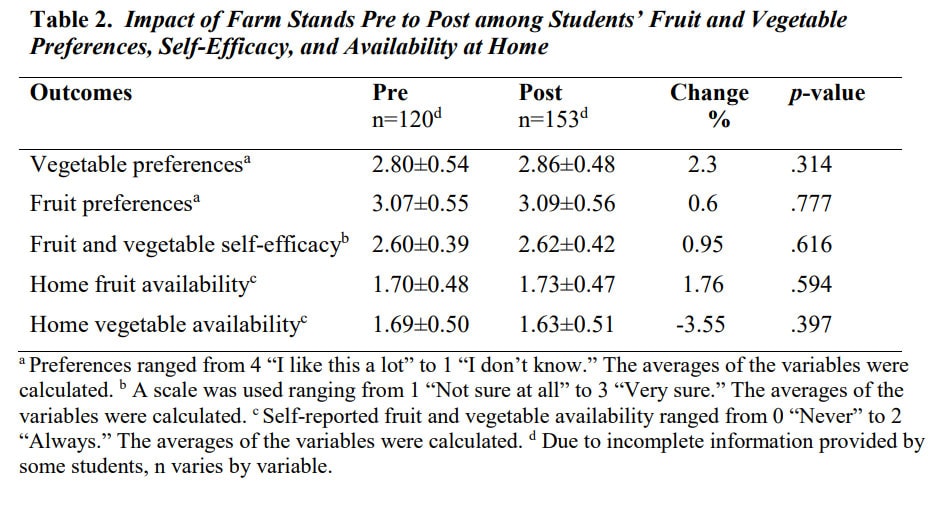 Fruit and vegetable self-efficacy increased 0.95% although this change was not statistically significant.  These results were not consistent with findings from previous research which indicated that multi-component nutrition intervention activities increased students’ confidence to consume fruits and vegetables (Tuuri, et al., 2009).  A 1.76% increase in home fruit availability and a 3.55% decrease for home vegetable availability were also observed by the researchers; however, these changes did not reach statistical significance.  These findings are not consistent with research supporting that the consumption of fruits and vegetables is affected by the availability and attractiveness of the produce available to purchase (Blitstein et al., 2012; Caldwell et al., 2009).

The farm stand did have a positive influence on students’ purchases and consumption of produce, particularly fruit and fruit-based recipes.  Students purchased produce from the farm stand more than family, staff, and community members.  The impact of the farm stand intervention on fruit and vegetable preferences, self-efficacy, and availability at home did not reach statistical significance from pre to post which may be attributed to several factors. The produce available for tastings was inconsistent at each farm stand and the farm stand was only offered two times a month for four months.  Also, when and where the farm stands were available on campus could have been a barrier to frequenting them.  Minimal hands-on participation was required from the students which may have impacted their perception of self-efficacy.  Further, there are environmental factors that may affect students’ self-efficacy including exposure to unhealthy foods, lack of fruits and vegetables in the home, food-related parenting practices, and level of acculturation among ethnic minorities (Lytle et al., 2006).

Schools can implement specific strategies to enhance fruit and vegetable preferences, self-efficacy, and availability at home among students and their families.  Local farms could sell produce directly to schools providing consistent and regular access to fresh produce.  Farmers can also visit the schools bridging the “farm to fork” connection making students potentially more open to purchase and consume local produce.  School nutriton programs can incorporate this produce, including the more popular produce items identified by students in this study, into school menus as a method for increasing student exposure and preference.  Recipes can be developed so school foodservice can offer a variety of fruits and vegetables in new and creative ways.  School foodservice staff may require training on how to prepare fresh produce, and specific equipment may need to be purchased to prepare the produce.

To encourage preferences and availability of fresh produce among students and their families, schools could collaborate with farmers to set up regular farm stands on the school campus.  Students in this study stated they would frequent the farm stand if it were available more often.  These farm stands could be offered on a weekly basis or more as needed.  A school authority would need to be responsible for managing the farm stands and marketing them to maintain their viability.

A limitation to this research was that the pre and post surveys were not matched.  It would be desirable to have a staff member administer the surveys to students ensuring they were matched pre to post.  Another limitation was the time of day that the farm stand operated.  The study also used self-reported surveys to evaluate the intervention, which could include inaccurate reporting. Further, this study was a small-scale pilot study which adopted a convenience sample.

There were several lessons learned from this research that would benefit future farm stand studies.  More collaboration and partnership between the school staff and the farm stand team is necessary. This is invaluable to this type of project because school staff has a greater connection with the students and their families. Further, in order to see an impact in preferences, the same produce should be offered multiple times. Finally, in regard to self-efficacy, students should have hands on learning to increase self-confidence in fruit and vegetable selection and preparation.

This study was funded by the United States Department of Agriculture, Agricultural and Food Research Initiative (USDA-AFRI) in collaboration with the Center for Healthy Communities (CHC) at CSU, Chico. The authors also wish to thank the staff and student interns at the CHC, school partners, staff, and study participants.

U.S. Department of Agriculture, Food and Nutrition Service. (2016). Harvest of the Month (California).  Retrieved from https://snaped.fns.usda.gov/materials/harvest-month–california