Barriers and Possible Facilitators to Participation in Farm to School Week

The purpose of this study was to evaluate child nutrition directors’ (CNDs) Farm to School (F2S) Week participation. This cross-sectional, census survey was completed by CNDs working in Mississippi public school districts participating in the National School Lunch Program.

Descriptive statistics were used to summarize demographic data and the barriers hindering F2S participation. Out of a total of 74 CNDs, 50 reported no participation in F2S Week 2012. Of the 24 CNDs that did report participating in F2S, the most frequently reported barrier for not participating in F2S or purchasing locally grown produce was a perceived lack of local food availability, mainly in terms of local food variety. When attempting to overcome barriers associated with purchasing locally grown produce, CNDs should seek out resources like Food Policy Councils or state affiliates of the National Farm to School Network.

In Mississippi, rates of childhood and adult obesity as well as nutrition-related chronic diseases such as hypertension, diabetes, and cancer rank among the highest in the nation (Behavioral Risk Factor Surveillance System, 2012; Centers for Disease Control and Prevention, 2012a, 2012b).

The National School Lunch Program (NSLP) has been targeted as a primary way to improve the dietary behavior and intakes of children across the country. The Healthy, Hunger Free Kids Act of 2010 (Pub. L. 111–296) required the U.S. Department of Agriculture to update the meal patterns and nutrition standards for the NSLP and School Breakfast Program to align them with the Dietary Guidelines for Americans (U.S. Department of Health and Human Services & U.S. Department of Agriculture [USDA], 2010). Among the many changes, the new standards for school meals increase the availability of fruits, vegetables, whole grains, and fat-free and low-fat fluid milk in school meals (USDA, 2012).

All 156 CNDs employed by Mississippi public schools participating in the NSLP were invited to take an electronic survey. An individualized email was sent to CNDs, inviting them to participate in the self-administered F2S Week survey. Survey questions incorporated F2S recommendations published by the Mississippi Food Policy Council and were developed by the researcher based on interviews with key partners who were from throughout Mississippi and had backgrounds in farming, school foodservice, procurement, and food policy (Rosenberg & Leib, 2011).

Erpelding, Pinard, and Yaroch (2011) developed a CND survey to assess F2S programs in Nebraska, and it was used as a guide to ensure that the CND F2S Week survey included all aspects of F2S that applied to the current project.

A total of 78 out of 156 CNDs completed the survey, and data from 74 CNDs were included in the analysis. The study was approved by The University of Southern Mississippi Institutional Review Board.

Of the 74 CNDs who provided data that was included in the final analysis, 50 CNDs reported no participation in F2S. For CNDs that reportedly did not participate in F2S Week, the most frequently reported barriers were identified as: local food items were not easily accessible for purchase (n=25); lack of knowledge regarding the bidding process outside of the statewide purchasing cooperative (n=18); cost of local foods (n=18); and inability to purchase quantity needed (n=17; Table 1).

The reported “lack of availability of local foods” could have been due to any one of several reasons including inability to find local farmers and/or local farmers who sell a variety of produce and at a quantity substantial enough to supply an entire district consistently. In Mississippi, public school CNDs can procure food from three different sources including independent distributors, the Mississippi Department of Education’s statewide purchasing cooperative, and the USDA Donated Foods Programs. One way to increase local food availability in terms of variety is to offer local items through normal purchasing distributors or the statewide purchasing cooperative. The option for CNDs to take part in a statewide purchasing cooperative may provide access to a greater variety of foods at lower prices, thus overcoming both the barrier of availability as well as the barrier of increased costs often associated with purchasing locally grown produce. As for availability and food supply, CNDs may need to be made aware of local items other than produce that could be marketed as F2S products. For example, apple cider, milk, beef, chicken, and wheat are all examples of possible local items. 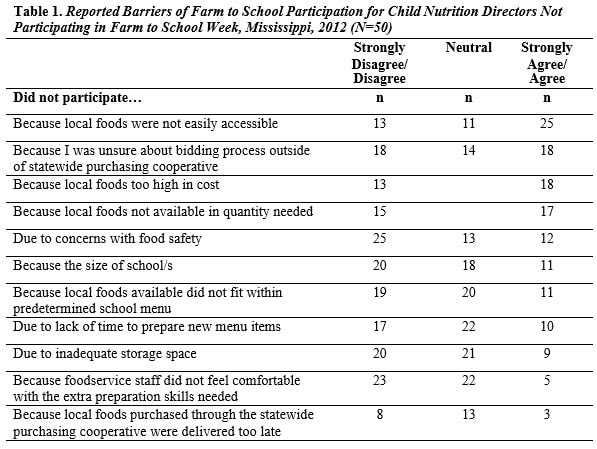 According to surveyed CNDs, costs related to labor and production are concerns, as the rising prices of foods coupled with the requirements to provide more fresh foods may reduce the amount of money available for purchasing local items. Perhaps identification and then sourcing of the top 10 food products used most by volume would be a way to save money by buying locally, in bulk. Because buying local usually means the foods are fresher which in turn means longer shelf life and less waste, CNDs might, in the end, actually be saving money by buying locally.

Purchasing regulations and food safety may have been primary concerns because CNDs perceived that only foods from Good Agricultural Practices/Good Handling Practices (GAP/GHP) certified farms are acceptable and available for purchase. Unfortunately, at the time of this study, only 35 of the hundreds of farms in Mississippi were GAP/GHP certified, with 18 of those farms solely harvesting blueberries or sweet potatoes and 9 offering various fruits and vegetables (USDA Agriculture Marketing Service, 2013). Because of the expense and effort involved in obtaining GAP/GHP certification, farmers may experience difficulty selling commodity crops to schools associated with the NSLP, thus leaving few options for local food purchasing by CNDs. Fortunately, efforts are being made by the U.S. Cooperative Extension Service and other entities to provide low or no-cost GAP/GHP training to local farmers— measures that could make purchasing from local farmers less strenuous for both farmers and CNDs. To address the barrier of food safety, the use of alternative food safety assessments that are developed for smaller food producers should be promoted.

The concern of a lack of time, which was associated with infrequent deliveries and increased labor associated with food preparation, as well as other concerns can be addressed through resources like Food Policy Councils or state affiliates to the National Farm to School Network. Undergirding all these concerns is continuing education about resources available and actual regulations enforced by the State Agency. For example, the Mississippi Department of Agriculture and Commerce, Mississippi Department of Education, and Mississippi State University Cooperative Extension Service as well as the National Farm to School Network are working to link “experts” like farmers, researchers, CNDs, and State Agency employees (P. Manning, personal communication, February 17, 2015). These links would allow CNDs to contact farmers that they might not have otherwise identified. Also, researchers can connect with farmers and CNDs to evaluate programs, and CNDs can have a forum in which State Agency personnel are able to provide clarification and counsel regarding policies and procedures.

Future research regarding specific motivators of CNDs that actively participate in F2S would help identify variables that predict F2S participation. The impact of F2S on students’ fruit and vegetable consumption as well as changes in NSLP participation rates should also be evaluated. Furthermore, while fruits and vegetables are often the only items included in F2S evaluations, other local produce items such as milk, meat, and grains should be investigated, seeing as these other items are just as important to local economies and children’s diets as fruits and vegetables.

Centers for Disease Control and Prevention. (2012a). Adult obesity facts. Retrieved from http://www.cdc.gov/obesity/data/adult.html

Landry, Weiss, Connell, and Yadrick are, respectively, professor, instructor, professor, and professor/chair in the Department of Nutrition and Food Systems at The University of Southern Mississippi (USM) located at Hattiesburg, Mississippi. Lingsch was a graduate student at USM when this study was conducted.