Implementation and Evaluation of Farm-to-YOUth! A Fruit and Vegetable Produce Education Program

A six-week produce education program was implemented in the cafeterias of three (two control and one treatment) elementary schools in a rural, Appalachian Mississippi school district. A twice-weekly cafeteria tasting station was utilized. The first weekly tasting was the fruit or vegetable without any additional seasonings or flavorings, and the second was a mixed dish prepared from a recipe that included the fruit or vegetable as the primary ingredient. All students self-selected to taste the samples, whether or not they participated in the school meal program.

On the last day of the week, students enrolled in the treatment school received all ingredients, along with a recipe and kitchen tools, to take home for preparation of the mixed dish. Take-home pre- and post-cross-sectional surveys of parents/caretakers were utilized to evaluate the program.

Overall, 1,144 participated in the program, with 781 students (68.3%) being from the control schools and 363 students (31.7%) from the treatment school. Parents/caretakers of participating students responding to the pre-survey (n=465/1144, 41% response rate) were 34±8 years of age and primarily Caucasian (n=264/465, 57%) and female (n=425/461, 92%). Students associated with parents/caretakers (n=464) were 6.9±2.0 years of age, predominantly Caucasian (n=246/459, 49%), and in first grade (n=125/459, 25%). For the post-survey, 146 parents/caretakers (12.8%) participated. All educational information, including a fruit and vegetable cookbook, and kitchen gadgets to assist in preparation of the fruits and vegetables were rated as desirable by both parents/caregivers and students with the majority indicating materials were “good”, “very good”, or “excellent”. Provision of produce was also reported as useful.

While attention to improved intake in the home environment is needed, school, early care, and education policies focused on improving intake are warranted (Kim et al., 2014). Federal legislation (Healthy, Hunger-Free Kids Act of 2010, 2010) and associated nutrition standards have been implemented for National School Lunch and School Breakfast programs to foster improved fruit and vegetable intakes among children in the school environment (U. S. Department of Agriculture, 2012). Kim and colleagues (Kim et al., 2014, page 675) asserted that “School districts, schools, and early care and education providers can help increase children’s fruit and vegetable consumption by implementing nutrition standards that meet or exceed federal regulations for meals and snacks”. Other recommendations included increased visibility of fruit and vegetables in cafeterias and provision of nutrition education (Kim et al., 2014). Exposure- based interventions with repeated exposures to nutrient-rich foods, such as tastings, can be effective avenues for schools to utilize to improve dietary intakes of produce among elementary school children in preschool through sixth grade (Kaiser, Schneider, Mendoza, George, Neelon, Roche, & Ginsburg, 2012; Wardle, Herrera, Cook, & Gibson, 2003). Tastings coupled with informal nutrition education have been particularly effective (Cirignano, Fitzgerald, Hughes, Savoca, Morgan, & Grenci, 2014). In summary, it appears that a multipronged approach to improving fruit and vegetable intake in children is needed.

This manuscript describes: 1) the implementation of a fruit and vegetable education program developed to improve produce intake among youth and their families in a rural Mississippi school district; and 2) satisfaction data for the program.

This program and its evaluation protocols were approved by the University of Mississippi Institutional Review Board prior to implementation. The school district also reviewed and approved the program.

The program was implemented in three elementary schools in Calhoun County School District, located in Calhoun County, a rural, Appalachian county in the state of Mississippi. The population of Calhoun County is 14,610, and the largest racial/ethnic groups are White (69.8%), African-American (28.5%) and Hispanic (5.6%) (U. S. Census Bureau, 2016). Calhoun County is assigned a Rural-Urban Continuum Code 9 (completely rural and not adjacent to a metro area) (U. S. Department of Agriculture, 2013) and is designated as a distressed county by the Appalachian Regional Commission based upon three economic indicators, unemployment rate, per capita market income and poverty rate (Appalachian Regional Commission, 2017).

Prior to implementation of the program, all students in the schools and their parents/caretakers were informed about the program by an information sheet, which was sent home with a produce cookbook, From Asparagus to Zucchini: A Guide to Cooking Farm-Fresh Seasonal Produce (Madison Area Community Supported Agriculture Coalition, 2004).

A six-week produce education program entitled, “Farm-to-YOUth!”, was implemented in the cafeterias of all three elementary schools. Table 1 summarizes the program. It included nutrition education handouts (English) sent home with children and produce tastings in all three school cafeterias during lunch meals. A tasting station staffed by a nutrition graduate student was in the cafeteria twice weekly. During the first tasting of the week, the fruit or vegetable was given to students without any additional seasonings or flavorings. The second tasting of the week was a mixed dish prepared from a recipe that included the fruit or vegetable as the primary ingredient. Most recipes were taken from the cookbook that was given to each student prior to the start of the program. All students were invited to taste the samples and self-selected to participate, whether or not they ate the school meal or brought their own lunch.

As noted above, all schools (control school A, control school B, and treatment school) received nutrition education handouts and had a tasting station twice weekly. In addition to the education and tastings, all students enrolled in the treatment school received fresh produce to take home to prepare the mixed dish sampled that week. Students took home the produce, other recipe ingredients, kitchen gadgets to aid in preparation, and the recipe in a tote or bag with the program logo. Generally, the produce was whole, unprocessed produce. However, some packaged items (e.g., bag of Brussels sprouts) were utilized. Students absent from school when items were distributed on the last day of the school week did not receive the take-home produce.

All produce tastings were prepared and delivered to the school by a community partner (supermarket) with facilities approved by the public health department. The take-home produce was also secured from that community partner.

A cross-sectional survey, that is, a survey administered at a particular point in time to a group, was conducted with parents/caretakers of the students. The survey, approved by the Institutional Review Board of University of Mississippi and the Superintendent of the Calhoun County School District, was utilized to evaluate the program. Both pre- and post-program surveys were used. 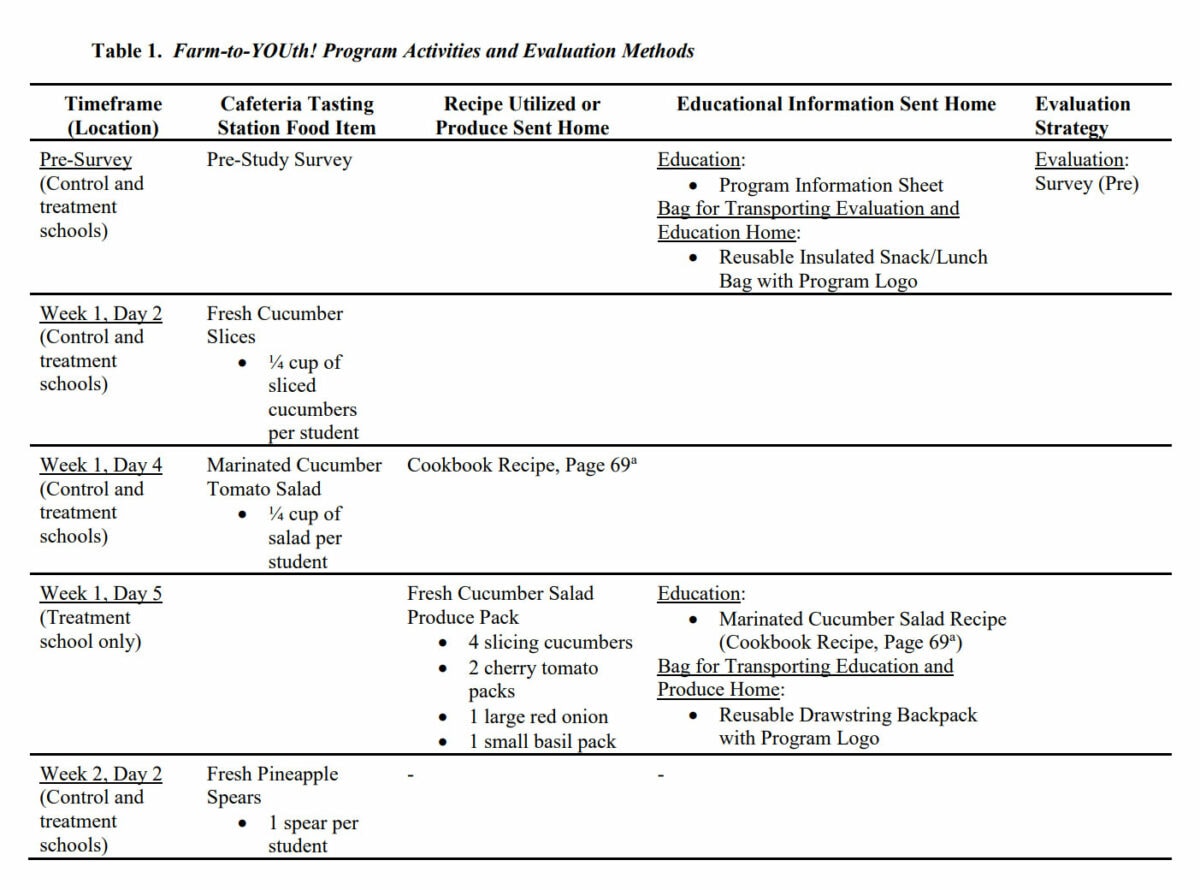 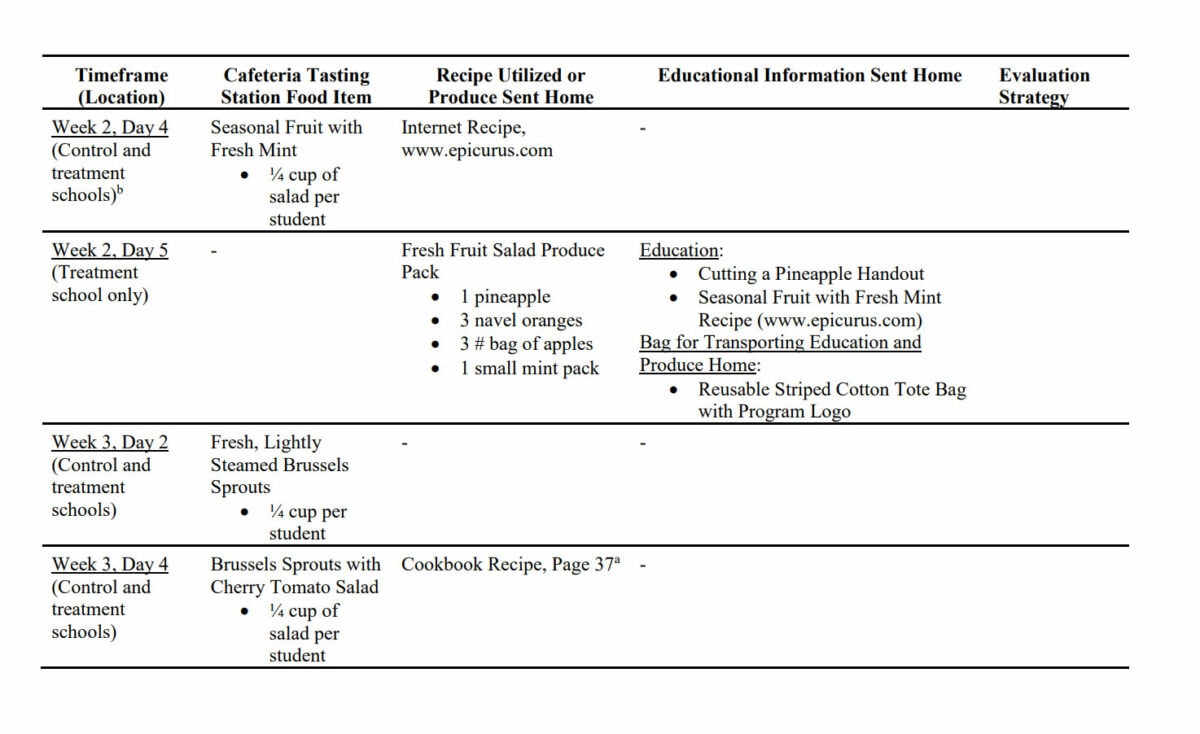 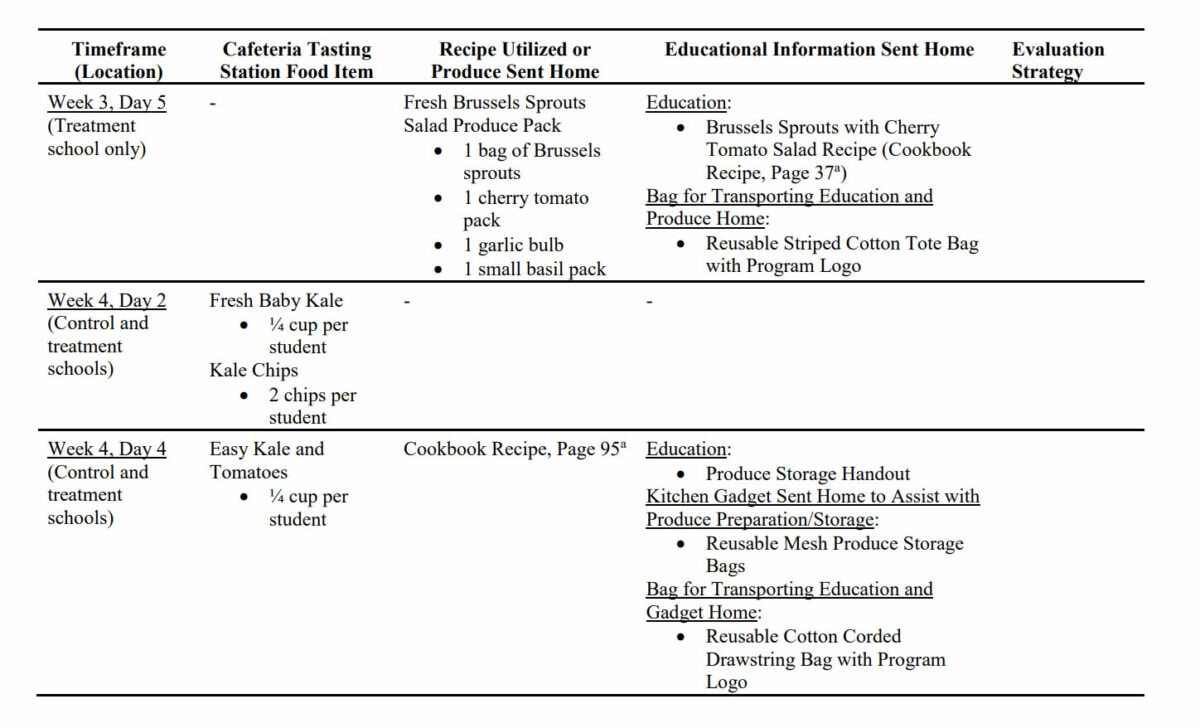 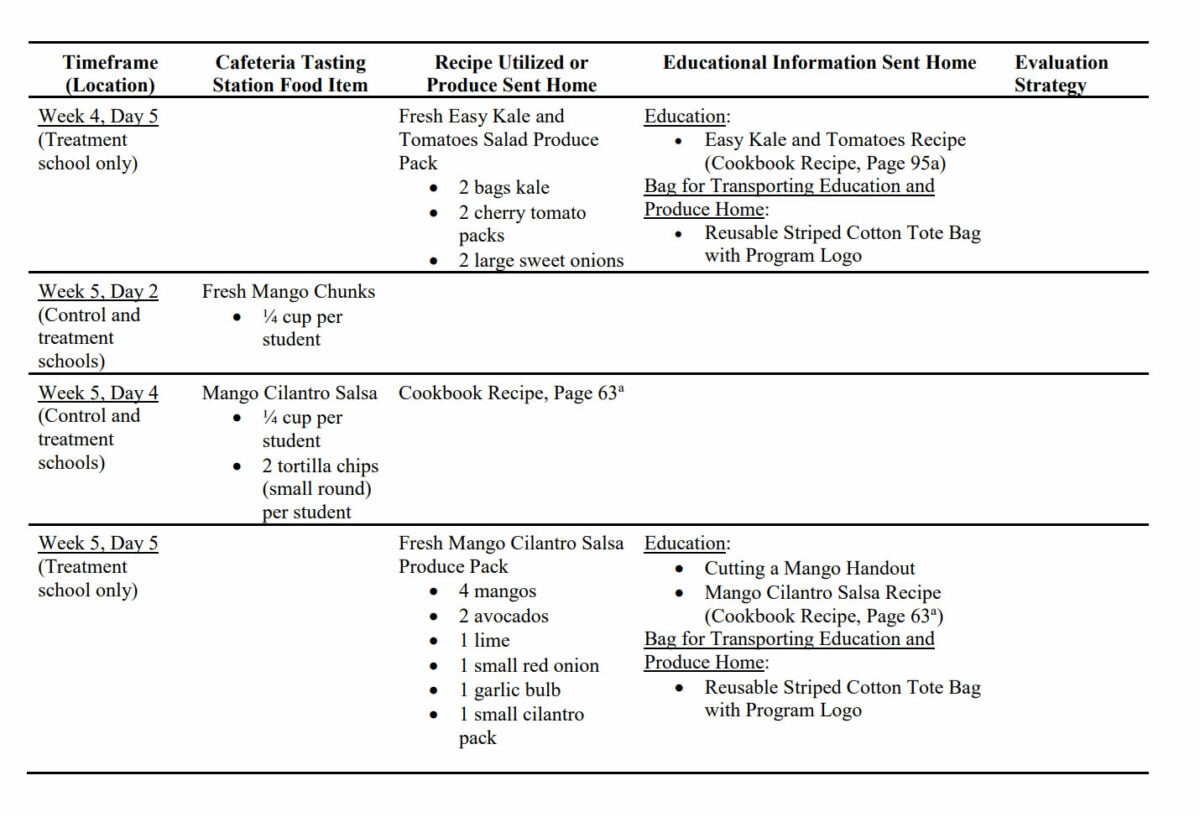 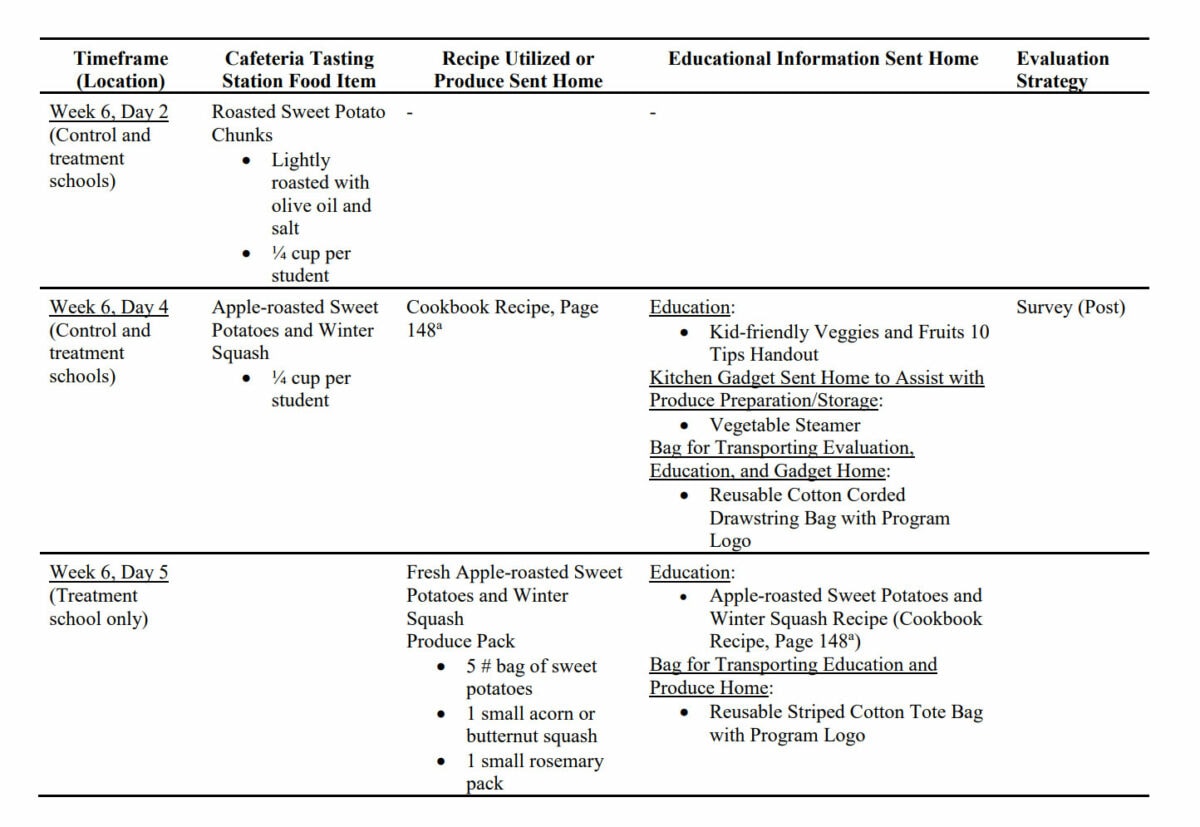 bDue to a cancelled school day, this Cafeteria Tasting Station activity was omitted.

Over 97% of parents/caretakers reported that the kitchen gadgets were “good” to “excellent”, with almost 94% reporting that they had used the gadgets. Of the responding parent/caregivers receiving take-home produce (n=111), only 2 (1.8%) rated the quality of the produce received as “fair” or “poor”.

Over 70% of the children of responding parents/caregivers had told them about the cafeteria tasting station, with more than 91% of the parents reporting that their child rated the tasting station as “good” to “excellent”.

A fruit and vegetable produce education program can be implemented in a rural elementary school and be favorably received by both parents/caregivers and students. Our results support those of previous studies related to increased visibility of fruit and vegetables in cafeterias, provision of nutrition education (Kim et al., 2014), exposure-based interventions with repeated exposures to nutrient-rich foods such as tastings (Kaiser, Schneider, Mendoza, George, Neelon, Roche, & Ginsburg, 2012; Wardle, Herrera, Cook, & Gibson, 2003), and tastings coupled with nutrition education (Cirignano, et al., 2014).

Our results support that educational information, including a fruit and vegetable cookbook, and kitchen gadgets to assist in the preparation of the fruit and vegetable items are desirable for families. Provision of take-home produce facilitated communication between children and parents about cafeteria activities (e.g., tasting station) and promoted usage of nutrition education materials sent home. Additional evaluation should be conducted to assess the effect of the program on produce selection and waste in the cafeteria. Other household characteristics, such as household food security status, should also be evaluated to assess the impact of program.

Funding for the program was provided by the University of Mississippi Foundation, Food and Nutrition Security Support Fund.

Van Duyn, M. A. S. & Pivonka E. (2000). Overview of the health benefits of fruit and vegetable consumption for the dietetics professional: Selected literature. Journal of the American Dietetic Association, 100, 1511-1521.

Michelle A. Weber is Graduate Assistant and David H. Holben is Professor and Gillespie Distinguished Scholar at The University of Mississippi, School of Applied Sciences, Department of Nutrition and Hospitality Management in Oxford, Mississippi.

1) the implementation of a fruit and vegetable education program developed to improve produce intake among youth and their families in a rural Mississippi school district; and

2) satisfaction data for the program.