Findings contribute to understanding factors related to continued use of school-based SBs. Facilitators identified by SNDs and administrators, such as strong support from staff and adequate equipment, may contribute to the successful implementation of SBs.

Overweight and obesity in the United States are public health issues with negative health consequences including, but not limited to, premature death, heart disease, type II diabetes, and some cancers (U.S. Department of Health and Human Services, 2001). Childhood obesity is also associated with negative health outcomes including type II diabetes, hypertension, and stigmatization (Daniels, 2006). Because of negative health consequences associated with childhood obesity, prevention and reduction of overweight and obesity in children are high priorities.

To facilitate the number of SBs across schools in the U.S., the Let’s Move Salad Bars to Schools (LMSB2S) was formed. LMSB2S is a sub-initiative to Michelle Obama’s Let’s Move! initiative to off-set the equipment costs for SBs (Harris et al., 2012). As of March 2016, almost 4,500 SB units had been donated (Let’s Move Salad Bars to Schools, 2016). Schools and/or school districts can apply for a SB through a simple online application.

The LMSB2S initiative facilitated donations of SB structures to 43 Orleans Parish Schools in Louisiana. Applications were completed by schools independent of this research project. All 43 schools were approached for participation in the study by contacting administrators from each school. Of the 43 schools that received SB units, 19 schools agreed to participate. Of those 19, seven were not operating the SB at the time of the study, but they were included to gain information about factors related to non-implementation. All data were collected in Spring 2012 by trained research assistants. Each school’s food service director (FSD) and staff plus the administrator (principal or designee) completed self-administered surveys after study protocol and materials were approved by the Tulane University Institutional Review Board.

Two self-reported surveys for administrators were developed from previously published studies (Dority, McGarvey, & Kennedy, 2010; Gordon, Crepinsek, Nogales, & Condon, 2007; National Farm to School Network, 2011; San Francisco Department of Public Health, 2009). Survey questions were reviewed and approved by a panel of experts. The first survey was distributed to administrators in SB schools. The modified survey was distributed to administrators in non-SB schools. Questions pertinent to only SB schools were eliminated from the modified survey.

Facilitators that were identified with a checklist included sponsorship from an outside organization, potential high use by students, and support from staff and parents. Barriers included: keeping food fresh, maintenance, financial support, low use by students, and resistance by foodservice staff. The decision to apply for a SB was based on a question with the following response options: school-initiated request, organization above the school request (e.g. school district or charter association), or encouragement from an outside agency.

Training was identified from a checklist that included no training, procurement of SB food items, seasonal local produce, receiving SB food items, storing SB food items, SB safety, SB preparation, SB menus and displays, SB implementation, and SB maintenance. Infrastructure for SB was from a question assessing if the food service director perceived he or she currently was equipped with the kitchen infrastructure to store SB items. Additional staff needed for SB was from a survey question asking if additional staff was needed to maintain the SB.

Facilitators were identified from a checklist that included sponsorship from an outside organization, high use by students, strong support from staff, strong support from parents, having adequate equipment, training of staff, having enough staff, costs being manageable, and having proper storage space. Barriers were identified from a checklist that included keeping food fresh, cost, equipment, financial support, contractual limits, low use by students, storage space, lack of staff, time devoted to upkeep, lack of training for staff, food delivery schedule not being flexible, and inability to accommodate demand for the SB.

Nine statements questions about salad bars in schools were used to assess food service staff and director attitudes towards the SB. Surveys were distributed to food service staff in SB schools. Descriptive frequencies were calculated for all variables and were performed using SAS version 9.3 (SAS Institute, Cary, NC).

Two administrators of non-SB schools identified reasons why their SB programs were not operating. One administrator reported that the SB was delivered and taken away; the other administrator identified a change in school leadership from the time the SB application was completed and the time it was delivered. No further details were provided regarding these circumstances.

Overall response rate for the SND survey was 100%, although some participants did not answer every question. Table 1 displays the SND results on SB initiation/continued implementation.

Two SNDs from non-SB schools provided insight into the lack of implementation. One SND reported needing a menu for the SB from the central office. Another reported that the school did not have the space for a SB. 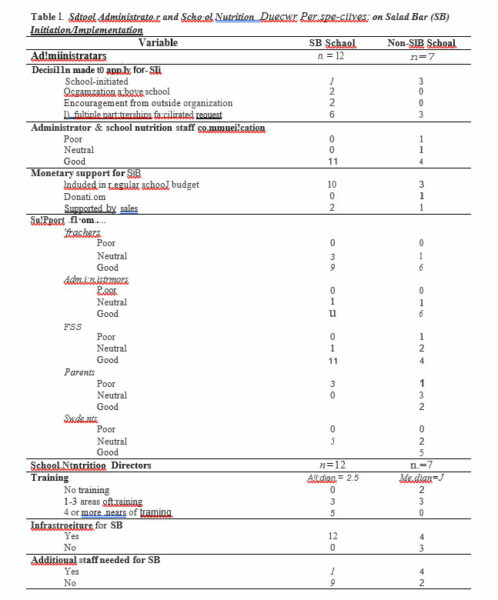 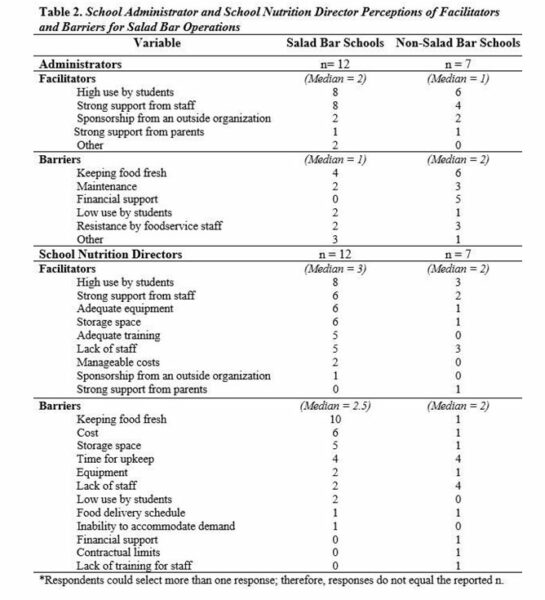 Both SND and staff were surveyed about their attitudes toward the SB. Responses were combined for staff and directors. The response rate for the school nutrition directors and staff (SNS) survey was 92%. Table 3 displays the SNS attitudes from SB schools. The majority of SNS felt the SB had changed the lunchroom atmosphere for the better for students (89%) and for the SNS (75%). Almost all SNS reported that their schools had the proper equipment to maintain the SB (95%). Most SNS felt the time they spent preparing and maintaining the SB was worthwhile (77%); yet many did not feel the SB improved the way they felt about their job (63%). The majority of SNS reported that they had been eating more F/V since the implementation of the SB (86%), but did not feel the students were eating more F/V (76%).

Finally, most SNS felt the students had a positive attitude toward the SB (84%) and that the reception of the SB to the food service staff had been positive (71%). 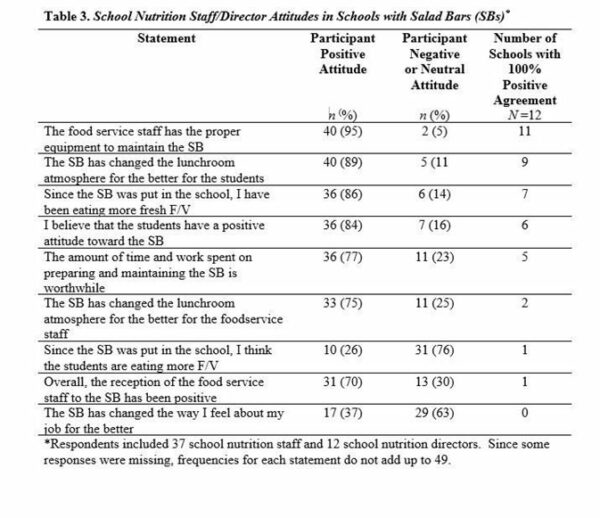 Results of the current study advance the idea that school-based environmental interventions, such as the use of the SB, could have beneficial implications for increasing youth consumption of F/V. Results also have the potential for highlighting future strategies which administrators and SNDs might use to initiate or improve the sustainability of their own SB programs.

While this study examined perspectives of administrators related to SB initiation/ implementation, previously published literature has provided information on administrative perspectives regarding priorities in schools. Many administrators value health, but with competing priorities such as academics, discipline, and school safety, it is difficult to strike a balance (Nollen, et al., 2007). Some administrators felt that they were unable to add more health programs in their schools that require staff to take on extra responsibilities without taking resources away from current programs (Nollen, et al., 2007). The research from this project broadens our knowledge about the competing priorities administrators face and how challenging the adoption of a school-based SB might be for administrators. Additionally, with several of the SBs not in operation, the need for administrator support with food service initiatives is essential. When a change in administration occurs, the need for the SB to be re-marketed to the new administration is necessary.

SNDs in SB schools reported a higher number of facilitators and also a higher number of barriers related to SB initiation and implementation. SNDs operating SB programs, compared to schools without SB programs, may be acutely aware of the barriers associated with SB implementation due to the daily challenges and stressors they face in their operation. The majority of SNDs in SB schools reported that keeping food fresh was the biggest barrier related to operating an SB; this finding is consistent with other research examining barriers from the food service perspective regarding service of fresh F/V (Nollen, et al., 2007; Brouse, Wolf, & Basch, 2009). Another barrier of SB initiation and implementation that emerged from the research was the need for proper storage space, including refrigeration space, which is supported by previous work (Izumi, Alaimo, & Hamm, 2010).

SNDs operating SBs should also consider the emerging research about SB placement in the cafeteria. Huyhn, Pirie, Klein, Kaye and Moore (2015) found that the mean cups of F/V selected from the SB were higher in stand-alone units compared to SBs that were incorporated into the lunch line. A secondary finding from this study identified that more F/V were selected from SBs when the unit was first visible when entering the cafeteria compared to where the hot lunch line was first visible. However, Adams, Bruenig, Ohri-Vachaspati, and Hurley (2016) suggest that the actual consumption of F/V is higher when the SB is placed inside the lunch line compared to those that were outside the lunch line. Other considerations for SB operations should include the number of SB items offered. Several studies support an association between variety and selection of F/V (Adams, Pelletier, Zive, & Sallis, 2005; Jeffrey, French, Raether, & Baxter, 1994; Huynh et al.,2015). Huynh et al. (2015) found no difference in F/V consumption between 12-14 items and 15 or more items offered, suggesting that variety is important, but there may be a ceiling effect for the number of F/V offered. FSDs can utilize this information, in conjunction with our study as they make decisions about SB implementation.

SNS demonstrated favorable attitudes toward their additional role in operating the SB. Despite their favorable attitudes, the majority of SNS members did not believe that the SB had increased F/V consumption of students, but more objective measures would be needed to determine if F/V consumption has not increased. SNS may be a crucial component to the initiation/ implementation of new programming.

One limitation to the study is the small sample size; some schools may have declined the invitation to participate because there was no monetary incentive offered for participation. Additionally, because this was a descriptive non-randomized study, hypothesis testing was not appropriate.

No study to date has examined the perspectives of administrators and SNDs regarding the initiation and implementation of an SB program. The information gathered from this study can help provide insight to school administrators and SNDs interested in adopting an SB program and help guide their decisions toward successful implementation of a program. In turn, this could potentially increase F/V consumption in children and reduce health consequences associated with childhood obesity.

U.S. Department of Health and Human Services, Public Health Service, Office of the Surgeon General. (2001). The Surgeon General’s Call to Action to Prevent and Decrease Overweight and Obesity. Retrieved from http://www.cdc.gov/nccdphp/dnpa/pdf/CalltoAction.pdf

Andersen is an Assistant Professor at Utah State University in Logan, Utah. Myers, O’Malley, Rose, and Johnson are all associated with the School of Public Health and Tropical Medicine at Tulane University in New Orleans, Louisiana. Myers is Professor in the Department of Biostatistics and Bioinformatics while Rose is a Professor in the Department of Global Community Health and Behavioral Sciences. Johnson and O’Malley are respectively Director/Professor in Community Health Sciences and Assistant Director of the Prevention Research Center at Tulane.

Fruit and vegetable (F/V) consumption may aid in childhood obesity prevention. F/V consumption in youth is low. School-based salad bars (SBs) may improve F/V access in youth. The purpose of this study was to explore administrative and school nutrition personnel perspectives related to adoption and continued implementation of SBs.